Once again I find that I've attracted yet another toxic person into my life unknowingly. It started out so innocently but I quickly discovered that the person was a narcissist. I'm honestly not sure why it headed this way and why I didn't see or stop it before it got too far. When they refused to recognize my triggers and kept trying to push me into doing things, even though I'm extremely busy right now, I finally had to give up. Unfortunately, I knew that talking to them about this wouldn't get me anywhere as I'd already tried it. 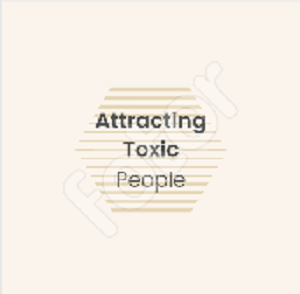 Why I May be Attracted to Toxic People

I think that part of the problem is that I grew up with a parent who's a narcissist so falling into the cycle again is almost "normal" for me. My family was deeply toxic - a mother who was a narcissist, and both physically and verbally abusive while my father was passive-aggressive. While I've cut them out of my life on and off again because they never change this time I haven't spoken to them in a year. Nevertheless, these are the people I'm used to being around so I think that part of it is subconscious.

Another thing is that I'm also empathic. I've been gifted with the ability to sense and feel other people's emotions but this is something that can also be a curse. It's been said that empathic people are naturally drawn to toxic people because they're able to easily tune into needy people.

I must also admit that I like helping people but I tend to not be good at setting up boundaries for myself. I think this also stems from my upbringing, unfortunately. Frequently this results in my inability to stand up for my own needs.

There's also a certain quality about toxic people that should send up a red flag but I think the fact that I like helping people has caused me to ignore it: Toxic people show extreme fluctuations in their personalities. Sometimes I overlook this because I know that people who have bipolar disorder also have extreme mood swings and this tends to go along with PTSD. Unfortunately, I like talking to people who've been through similar things as I have. This makes the lines somewhat confusing sometimes.

How I Want to Change Things

As I just mentioned, I need to improve upon setting boundaries for myself. I need to stick up for myself and stop these relationships before they get too far along. I am proud of myself for finally ending these types of relationships in my life as this shows that I'm growing and changing for the better. However, I do need to put a stop to these things much sooner - before they make me feel manipulated or like a puppet.
Maybe I also need to continue working on my own self-confidence. While I don't think that I have poor self-confidence, I do know that I did in the past and it's something I'm continuing to work on. Growing up with parents like mine has turned this into a lifelong journey. However, I'm at a point in my life where I won't allow anyone to control me and when they start to do so (especially after I've "warned" them to stop doing so) I reach my breaking point and put an end to the relationship.

What it All Boils Down To

I refuse to let these experiences stop me from making friends. I may be sick but that doesn't mean I'm not an outgoing person. I want to make friends which is why I'm still part of several different groups (e.g. Facebook, GroupMe, Discord channels) so that I'll have someone to talk to throughout my day besides my daughter whom I love but it's just a different kind of relationship. There's a lot for me to think about and work through here. Hopefully, this information will help someone else too.
Until next time, stay strong,
~ Bre