on June 28, 2020
The National Institute of Mental Health says that 7.7 million adults have PTSD (post traumatic stress disorder) today. This isn't only because there's been a surge of awareness about PTSD but now people are also recognizing that you can develop PTSD in other ways besides going to war (e.g. 9/11, natural disasters, physical or verbal abuse, emotional or psychological trauma). Unfortunately, while many people are being diagnosed with PTSD today there's still a lot of misconceptions about it as well. The one that I want to address with you here today is...

People who have researched the brain have found that people who have PTSD have major changes in their brain structures. This is especially true in the areas of the amygdala and the hippocampus. Trauma has resulted in major physical changes in these areas of the brain in specific. Unfortunately, this results in many additional problems for those who have PTSD. It's important to understand these changes so you can truly understand what it's like to live with PTSD.

Effect of Trauma on the Hippocampus

Normally memories are built and retrieved when the hippocampus blends together everything from all of your body's sensory areas. These are then stored in your short term memory (which occurs ) until they're processed into your brain's other parts. Unfortunately, when a person has PTSD their hippocampus shrinks in volume distorting their ability to record new memories and retrieve older ones.
Your hippocampus is also responsible for helping you distinguish between past and present memories. When it shrinks in volume it can cause you to lose your ability to discriminate between past and present memories. This is why people with PTSD suffer from flashbacks.

Effect of Trauma on the Ventromedial Prefrontal Cortex

The ventromedial prefrontal cortex region of your brain is responsible for regulating negative emotions (e.g. fear). This part of your brain also shrinks when you have PTSD, thus reducing your ability to regulate these emotions because it is unable to regulate itself or function properly after you've been traumatized. When this happens you will feel more fearful, anxious, and stressed even when what you're going through seemingly has no connection to the original trauma. This is because the prefrontal cortex of your brain can no longer function properly after you were traumatized. It's also why you may find yourself struggling to find the right words to describe your thoughts and feelings since linguistic function also occurs in this part of your brain and has been disrupted by your trauma.

Effect of Trauma on the Amygdala

Activity within the amygdala region of the brain increases when there's been trauma. This is the part of your brain that helps with processing emotions and managing fear responses. It works with the hippocampus to recall situations from the past to determine if things are safe, if you like something, and most importantly (especially to those who have PTSD) whether or not to initiate stress responses and trigger hormones. So, when this part of your brain is hyperactive and it connects with a broken hippocampus it'll result in a distorted view of situations.
When you have PTSD the reason why your amygdala is hyperactive is because it's responding to stimuli that are connected to your trauma. Unfortunately, the amygdala can become so hyperactive (or enlarged) in certain people who have PTSD that fear and stress responses may occur when they're simply shown a picture of people exhibiting these emotions. This explains why people who have PTSD struggle to control their emotions.

Effect of Trauma on Cortisol Levels

When a normal person experiences a brief period of stress or someone is suffering from major depression they typically have high levels of cortisol and corticotropin-releasing factor. However, those who have PTSD only have an increased corticotropin-releasing factor while their cortisol level remains low. In my case, this has led me to develop adrenal fatigue - something that further complicates my PTSD.
Other chemicals in patients diagnosed with PTSD also seem askew, including:

Remember: PTSD is a Mental Injury, Not a Mental Illness

Researchers believe that due to the way that a person's brain is affected by PTSD, it's important to see that PTSD is a mental injury, not a mental illness. This is mainly because of the fact that the symptoms of PTSD are merely a natural reaction to a distressing event during which a person feels overwhelmed, afraid, or even helpless. In contrast, mental illness is something that's "wrong" with a person, not a manifestation of how a normal person responds to trauma.
An example of this would be a person who falls and cuts their leg is said to have an injury. It is possible for bleeding to occur as a symptom of the injury but just how much bleeding occurs depends on the injury's severity. In a similar fashion PTSD symptoms often result in issues with concentration, angry outbursts, sleep disturbances, sadness, and anxiety. These are natural responses to the overwhelming circumstances a person has been through.

Learning to Manage Your Brain Injury

There are many things that I've found  to be beneficial to healing my brain and moving past my 40+years of trauma. One of the biggest things I've found that's truly helped me is my relationship with God. I once was a weary traveler but He stretched His hand out to me and I'm learning to rest in Him. This is where I'm coming from when I wrote the short devotional, Finding Rest in God. I pray that through this short devotional you'll find your rest in Him too.
Adrenal Fatigue Health PTSD 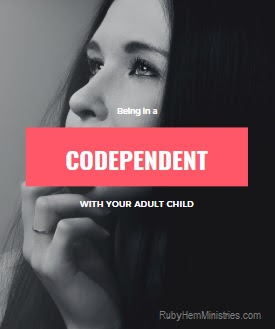 Being in a Codependent Relationship With Your Adult Child

Being in a Codependent Relationship with Your Adult Child...This is something I've recently concluded is an issue for me: My 18-year-old daughter and I are codependent. Up to this point I wouldn't have cared but let's dig deep here for a bit...
Let's start by understanding what the term codependent actually means.
Codependence is a complex pattern of excessive selflessness and preoccupation with another person that does not serve both people optimally. Codependency (or codependence, co-narcissism or inverted narcissism) is a tendency to behave in overly passive or excessively caretaking ways that negatively impact one's relationships and quality of life. - Wikipedia.org
When you look at this definition you see that a codependent person is someone who is unable to function on their own. They depend on another person to help them think, process, and essentially live. In doing so they're essentially people pleasers - putting the other person's needs ahead of thei…

Do you have Adrenal Fatigue? Have you even heard of it?
In 2018 I was seeing a doctor who wasn't taking my health issues seriously, simply telling me that I'm "depressed" when I wanted to get up and do things (e.g. who's depressed and still wants to get up and do laundry). He finally hospitalized me in November / December for neurological testing. Unfortunately, after a week in the hospital, his results were inconclusive. He admitted that I had:A small brain aneurysm: He said that it was so small that it couldn't really harm me and my current PCP understands.Tumors on my back: He said they were not bad enough to do anything. Unfortunately, he was wrong in that it is lying in just the right spot to pinch nerves if I'm not careful.Small blood vessels leading to my neck: He said that they were small enough to restrict some oxygen flow to my brain - something I notice since I get seriously dizzy when I bend over.This didn't really address anything, so I co…